Posted on June 3, 2015 by Pamela Schoenewaldt — Leave a comment 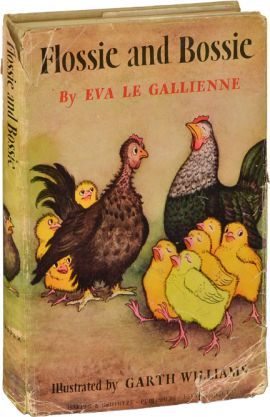 Years ago there was a children’s book, Flossie and Bossie, about two Bantam hens, the good, drab one, Flossie, and the mean, beautiful, vain Bossie. And their transforming friendship. I remember it as pretty gripping.

However there was a spook element for me in this drama of the hen house. Major figures are the hired hands, who I believe don’t have names. See the black and white illustration by the great Garth Williams (he also did  E.B. White’s children’s books). Only hands. Never a body. Somehow these “hands” walked, talked, thought, ate. So of course I was spooked, especially when it turns out they lived in a house which first Flossie and then Bossie visit. A special house built for hands?  What did their chairs look like? Did they sleep in hand-beds? Was the boss a regular person or was he a hands-only being too? It’s the sort of thing to keep a kid up at night.