Home › About the books › When We Were Strangers: Excerpt

When We Were Strangers: Excerpt 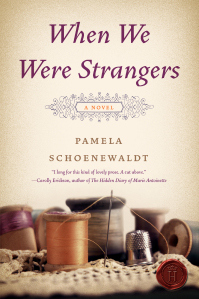 Available for purchase in paperback or e-book.

Chapter 1: Threads on the Mountain

I come from the village of Opi in Abruzzo, perched on the spine of Italy. As long as anyone remembers, our family kept sheep. We lived and died in Opi and those who left the mountain always came to ruin. “They died with strangers, Irma,” my mother said over and over in her last illness, gasping between bouts of bloody coughing that soaked our rags as fast as I could clean them. “Your great-grandfather died in the snow with Frenchmen. Why?”

All Opi knew how Luigi Vitale had left his land, his sheep, his sons and his house with three rooms and a stable to walk north out of Abruzzo and up through Italy to invade Russia with the Grand Army of Napoleon. On the long retreat from Moscow, a Russian peasant pinned Luigi’s feet to the earth with a pitchfork and left him there to bleed and freeze to death. “With Frenchmen, Irma. Why?”
“Shh, Mamma. It doesn’t matter now,” I said, although I had always wondered why Luigi went to Russia even for a mercenary’s pay if winters in Opi were cold enough to freeze a man to stone if that’s the end he wanted.

The next to leave was my grandfather. Clever and ambitious, he said he’d find work in Milan’s new factories, send for his wife and son and they would all live well in the North. Months later, news drifted home that brigands had robbed and killed him two days out of Abruzzo. I cooled my mother’s brow with rosemary water. “Ernesto was different before that,” she insisted. “He sang and told stories.”

“Yes, Mamma.” She must have been delirious, for I never once heard my father sing. Perhaps he told stories in the tavern, but at home he rarely spoke.

In 1860 her brother Emilio left Opi to enlist with General Giuseppe Garibaldi, but he died on the beach in Sicily. “His patriot blood nobly spilled so our country might live united and free,” Father Anselmo read to my mother in a telegram signed by Garibaldi himself. From that day on, she called Sicily “that place, that cursed place that killed Emilio and threw him in a pit with strangers.”

In 1871, when I was ten, all Opi was summoned to the church piazza, where Father Anselmo read a proclamation from Rome that we must stand tall for we were now citizens of the glorious and invincible unified Kingdom of Italy. But unification changed nothing in our lives. We were still poor, we never saw the king and my mother still hated Sicily.

That year brought her sickness. At first the bright, dry summers and wild herbs I picked with Carlo eased the coughing, but then came that cruel mild winter. A wool merchant from Naples pressed for early shearing, pointing to the swelling buds on all the trees as signs of a marvelously forward spring. Old women pleaded with the men to wait, swearing that the stars, the birds, their very bones foretold a terrible coming cold. But the sheep were sheared and a good price paid for the wool. That night as men crowded our tavern to celebrate, a blizzard roared down the Alps. We pulled our breeding ewes from the fold and brought them home in the blinding snow, where for three days and nights there was only the stench of sheep to warm us. The rest of our naked flocks froze to death. Beasts ate their flesh. Two days later an avalanche covered the grain fields with rubble. And so began a hunger year, not Opi’s worst, the old ones swore, but terrible enough. I washed clothes for the mayor’s wife, who paid me the few centesimi her husband allowed. Carlo took day labor in the next valley, dragging himself home with barely strength to gnaw the bits of bread and onion that was our constant fare.

Slowly we rebuilt our flock and cleared the fields but my mother’s cough dug deeper in her chest where no teas could help her. Fevers came in waves, and she coughed up threads of blood. My father sold our crucifix and sent for a city doctor who listened to her heart through a gleaming brass tube, wrapped clean white fingers around her wasted wrist and backed away from the bed. “Tell me what to do, sir,” I pleaded.
“Sit with her, talk to her,” he said quietly, refusing my father’s coins. “No one can save her now.” He gave us a vial of laudanum for the pain, put on his fine coat and gloves and left us.

On the morning of her last day, my mother whispered, “Irma, don’t die with strangers.”

The soft fog of our breath hovered over the bed. My brother Carlo was there, my father and our aunt, old Zia Carmela, who had come to live with us. Neighbors filled our room, standing against the walls, the women crying softly. When Father Anselmo closed my mother’s eyes, three women silently came forward to wash and dress her.

Walking home after the funeral, my father cleared his throat and said, “Irma, you must cook and clean for me now as Rosa did.”

“And you will sing her songs and wear her clothes. You will do this for respect. You are an Opi woman now.”

Barely sixteen, I felt as old and shabby as my mother’s brown shawl, melting into Opi and the place carved out for me. As I knew my own plain face in our tin mirror, I knew each stone in the four walls and floor of our house. I knew the narrow streets draped across the mountain crest like threads for lacework never finished, unraveling into shepherds’ trails. These threads caught and held me like a web. I knew which families had carved wooden doors and which had rough nailed planks. I knew the voices and shapes of our people. By the sound of their footsteps I knew which of them walked behind me. I knew the old women’s coughs, the old men’s stories, the good husbands and those who came home stinking drunk from wine on market day. I knew why the mayor’s wife covered her bruises with a fine silk shawl. In a tapestry of Opi you’d see me in the shade of the olive trees with my dull brown hair and face turned away.

Opi was mine, but after my mother died, I grew anxious. If I didn’t wed soon, how could I live? It was not for love that poor girls sought husbands. We yearned for daily bread and a tight roof, firewood in winter and with luck a man who wouldn’t beat us, who would talk with us in the long evenings and comfort us when children died. We hoped, above all, for a man who was healthy and did not drink, who worked each day and helped us bear the hunger years.

Single women rarely had claim to a house in Opi. Zia Carmela lived with my father, who kept his aging sister out of charity. She hoped to die before he did, for who would take her then? And who would keep me? Carlo was good to us in his own rough way, but not a man to keep a sister or an old blind aunt. If by chance he married, it might be to a jealous wife who did not care to share her home. Father Anselmo said I had a neat enough hand to sew for fine ladies, but where were the fine ladies? Three of our pretty girls had found good husbands in Pescasseroli. But I was not pretty, had no light foot for dancing and my dowry of 120 lire would not tempt any decent man.

“Our wool fetched a good price at market,” Carlo told my father that spring. “Let Irma buy some cloth for a new dress. She doesn’t have to look like she’s from Opi, this lump on the miserable spine of Italy.”

“Silence!” my father shouted. “A man who scorns his birthplace is worse than a gypsy.”

So I would have no new dress. Slipping out to the well in the damp, windy evening, I let Carlo’s words turn in my mind. Yes, there was truth in them. Even our name, Opi, was a bitten-off, rag-end of a name, nothing next to Pescasseroli, a morning’s walk from Opi and the biggest city I’d ever seen. What pushed our ancestors up this mountain and kept them here with our sheep and tight little dialect? We tried to talk like city people, but keen ears caught the drag in our words. I told Zia Carmela, “I don’t even have to open my mouth. People just look at me and know where I’m from.” I turned so the shadows hid my high Vitale nose.

Half blind from lace-making, Zia traced my profile with her finger and said, “You must be proud, Irma. Our ancestors sailed from Greece before Rome was ever built.” I put down my needlework and stared into the fire until the licking flames became high-prowed ships bearing warriors with our noses west to Opi.

Carlo spat at the hearth and muttered, “Greece is a rock, old woman. What fool leaves one rock for another? You think these ancestors had worms in the head, like our idiot sheep? Before there was Rome we lived here in caves, like beasts.” My father smoked his pipe and was silent. He had never once considered his nose or told me to be proud.

“There’s always the church,” old women told girls with no beauty or too many sisters. We knew what they meant: if a man won’t marry you, the Lord always will. They sent my pockmarked cousin Filomena to the convent of San Salvatore in Naples. A year later her father went to visit and found her gone. “To the streets,” the nuns hinted darkly. He stormed back to Opi, tore apart everything that Filomena had ever sewn or knitted and threw the pieces out the door. It was the week of high winds. Soon we found shreds of Filomena’s work everywhere: bits of cloth on the bench near the baker’s shop and by the village well, a scrap of red in a crevice by the church stairs. When I carried lunch to my father in the fields, a bright thread snagged on a rock might be hers. But Filomena herself would still be in Opi if there had been men enough for all of us.