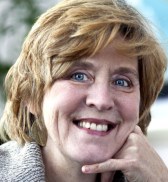 Pamela’s first novel, When We Were Strangers (HarperCollins, 2011), was a USA Today Bestseller, a major book club pick, a Barnes & Noble Great Discovery, short-listed for the Langum Prize in American Historical Fiction, and has been translated into Polish, Dutch, and Russian. Swimming in the Moon (HarperCollins, 2013) was cited by the Pittsburgh Examiner as a “a must read for anyone who enjoys beautiful, richly drawn characters, and a historical setting so realistic that one would believe they had been transported to another time. A glorious, unforgettable novel, A+.” It was a runner-up for the Langum Prize and connects powerfully with those who struggle with the impacts of mental illness in their families.

Her third novel, Under the Same Blue Sky (HarperCollins, 2015), follows a young German-American woman who seeks a place of healing and peace during the fury of World War I.

Pamela lived for ten years in a small town outside Naples, Italy. Her short stories have appeared in literary magazines in England, France, Italy and the United States. Her play, “Espresso con mia madre” (Espresso with my mother) was performed at Teatro Cilea in Naples. She taught writing for the University of Maryland, European Division and the University of Tennessee. Her interactive writing workshops inspire writers of all genre and stages.

Pamela lives with her husband, Maurizio Conti, a  physicist, and their dog Jesse, a philosopher, and can be reached at p.schoene@comcast.net, on Facebook, Goodreads, and Twitter.