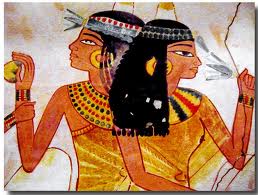 The first house my parents bought was in Metuchen, NJ., and after a 50s style cocktail party w/ Old Fashioneds and Martinis, they determined that the house needed an ancient Egyptian mural featuring all of us. My father had built my mother a darkroom for her photography; the room had a white wall; their friend Lorie was a fine artist, so of course . . . the mural.

Lorie worked quickly. The mural appeared. My father was the Pharoah, my mother the Pharoahess, her friends arranged vertically in sidewise sitting style, each with Ancient Egyptian (AE) coffee cups and saucers. I sidled sidewise with a large lotus flower. My brother, Chris, an adorable, round-cheeked 3, followed behind with a little blue hippo, about the size of a large cat. How wonderful to gaze at that mural and imagine us all coming to life in AE. Alas we moved soon after, and then again. Photographs of the mural burned in a house fire.

Is the mural still there? Did the new owners find it a tad odd and slather on paint, or in 60s style slap on ersatz Philippine mahogany paneling? I was in Metuchen some years ago and stopped at the house. The new owner was suspicious when I asked about an AE mural downstairs. A unique ruse to gain entry? Really, ma’am, an AE mural. Uh-huh. Sometime later I sent a letter to that address. No answer.

Lorie joined her daughter in Alaska, helped raise her grandchildren and died of brain cancer. My parents are both gone. My brother Chris, now called Emmet, has long lost his baby fat and has no blue hippo. I still see the mural, bright colors on white and me with a rose-colored lotus flower.