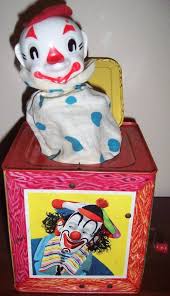 Years ago when we lived  in Italy I brought Italian friends a jack in the box for their daughter’s one year birthday. I’d gotten it at an American store, assuming this was a classic international toy. FYI, nope.

Since the young celebrant was taking a nap, I demonstrated the box. When a waving, madly grinning clown burst out of the box, the parents looked at each other, not with delight.

“It seems a little—scary for a small child,” Gabriella said.

I had to admit that if you don’t know the concept, if you haven’t seen it all your life, a clown out of box isn’t what you expect.

“Three blind mice. It’s a classic,” I added, although heard with fresh ears, the tune was a little frenetic.

“Why are the mice blind?” Fabio asked.

This wasn’t going well. “I don’t know,” I said, “but there’s a little poem that goes with it.”

“Well yes.” It’s true that blind, scurrying mice out of the soothing context of familiarity, were seeming a little disturbing, but I was in too far to stop. Gabriella, an ESL teacher, wanted to know the song.  So I related the blind mice chasing the sadistic, knife-wielding farmer’s wife, and the observer’s apparent delight in the gay scene.

“They’re blind but they’re chasing her?  How?” Gabriella asked.

“I don’t know. Maybe they smell her.” The whole mouse-wife thing was becoming a miniature horror film. “You don’t have to tell Cecilia the poem,” I offered.

“No,” Gabriella said firmly, “we won’t. Thank you for the present, though.” She looked at me curiously. “American children like this?”

“They do,” I said, asking myself the question on everyone’s mind: Why?

2 comments on “Why blind mice?”