Posted on December 29, 2011 by Pamela Schoenewaldt — Leave a comment 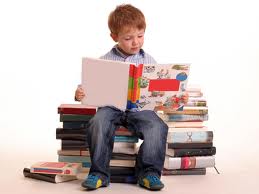 If you read this blog, probably you were an eager reader of books as a child. Perhaps you even “devoured” them. I came upon this 1835 article from the American Annals of Education and quote in full, so that you may be WARNED of the gluttony of over-reading and the UNIVERSAL LAW you may have transgressed in childish ignorance. Please, prudence in all things.

It is recorded of Madame de Stael Holstein, that before she was fifteen years of age, she had ‘devoured‘ 600 novels in three months; so that she must have read more than six a day upon an average. Louis XVI., during the five months and seven days of his imprisonment, immediately preceding his death, read 157 volumes, or one a day.

If this species of gluttony is pardonable in circumstances like those of Louis, it is less so in a young lady of fourteen or fifteen. No one can have time for reflection, who reads at this rapid rate. And whatever may be thought, these devourers of books are guilty of abusing nature, to an extent as much greater than those who overcharge their stomachs, as the intellectual powers are higher than the animal propensities.

If we find but few cases of mental gluttony equal to that of M. de Stael, there are many which fall but little short of it. Thousands of young people spend their time in perpetual reading, or rather in devouring books. It is true, the food is light; but it occupies the mental faculties, for the time, in fruitless efforts, and operates to exclude food of a better quality.

I should be among the last to engage in an indiscriminate warfare against reading, but when I see the rapid increase of books in our market, and their general character, and consider, that the condition of the market indicates the character and strength of the demand, when to this is added the conviction forced upon us, by facts within the range of daily observation, I cannot resist the conclusion, that it strongly behoves those who are friendly to mental as well as physical temperance, to sound an appropriate alarm.

Perpetual reading inevitably operates to exclude thought, and in the youthful mind to stint the opening mental faculties, by favoring unequal development. It is apt either to exclude social enjoyment, or render the conversation frivolous and unimportant; for to make any useful reflections, while the mind is on the gallop, is nearly out of the question; and if no useful reflections are made during the hours of reading, they cannot of course be retailed in the social circle. Besides, it leads to a neglect of domestic and other labors. The law, that ‘man shall eat bread in the sweat of his face,’ is not to be violated by half or three fourths of the human race with impunity. It is a UNIVERSAL LAW; and that individual, let the sex, rank or station be what it may, who transgresses, must suffer the penalty–not mere poverty, but a loss of actual enjoyment, if not of health. Even if we do not intrude upon the hours sacred to repose, sleep becomes disturbed, unsound and unsatisfying. Food loses its relish, life its zest, and instead of seeing the fair and goodly Eden we read and dream of, the world becomes less and less interesting, and we actually begin to complain of our Creator, while the fault is in ourselves.

Such, are some of the results of a perpetual devouring of books; but it would require a volume to state them all in detail, so as to show the full extent of the evil.

I am fully aware that the error in question favors book-makers and booksellers; for ‘it is an ill wind that blows nobody good;’ but this should not prevent our protesting against it. And while I disclaim all fellowship with those who derive no pleasure in the contemplation of the future, but place the golden era among past ages, I do not hesitate to say, that our ancestors, at periods not very remote, were more truly wise than the children of this generation. If they read fewer novels and light periodicals, they meditated more on those they read. If they had fewer books in the community, they had more of what Locke calls, sound, round-about sense. If they devoured less, they digested more. It has been said of Dr. Johnson, that giant in real literature, that he never read a book through, except the Bible.

How would our mental gormandizers scout the idea, suggested by one who passes for wise, that we should always read with a pen in our hand! How would Madame de Stael have smiled, at being told that she would probably derive more benefit from reading half a dozen pages in a day, than the same number of volumes!

But we may anticipate a better future. This book-mania is destined to pass away. There is–there must be–in a world which has been for thousands of years improving, too much good sense long to tolerate it. Let the present race of youth, of both sexes, continue to devour greedily every catchpenny publication that issues from the teeming press. But let them remember, that they are unconsciously hastening themselves from life’s scenes, to give place to other, and we hope more rational actors–those who will remember that neither their mental or physical natures can be sustained by mere gormandizing, and that digestion is no less important than mastication.