Posted on October 25, 2011 by Pamela Schoenewaldt — Leave a comment

Marco Polo’s claim to have imported the pasta concept from China is pretty much sauced with ego. For thousands of years, flour, water, salt and ingenuity have made pasta-like foods for the poor. In the first century BCE, Horace wrote of proto-lasagna, fried sheets of dough. The Jerusalem Talmud celebrates itrium, a boiled dough made in the Holy Land after the 3rd century ACE.
The illustration shows a 15th C Latin translation of an Arabic text, showing women making long pasta. As you see, it’s labor intensive. A solitary cook with a hungry family put hours into pasta-making. Culinary technology crept along. 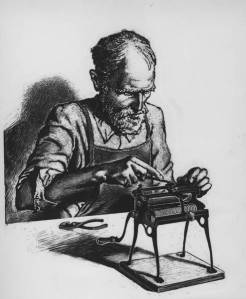