Posted on September 10, 2011 by Pamela Schoenewaldt — Leave a comment

Corsets must rank with foot-binding in “not made by or for women” fashion history. But the search for wasp waists and swan-curve backs did call up the ingenuity of Victorian engineers – and some benighted attempts to make these armatures more healthy – or less devastating. Consider:

No question corsets were deforming, painful, hot and unhealthy. These facts were well known at the time. Gwen Raverat’s Period Piece (1890) observes: “The ladies never seemed at ease…. For their dresses were always made too tight, and the bodices wrinkled laterally from the strain; and their stays showed in a sharp ledge across the middle of their backs. And in spite of whalebone, they were apt to bulge below the waist in front; for, poor dears, they were but human after all, and they had to expand somewhere.” 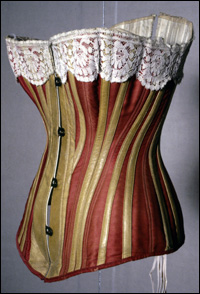 But some points of reality bear noting. The great mass of women in the 1880’s did not wear extreme corsets, or any corset at all. They worked on farms, shops,  factories or long hours at home. The wife of a New York City streetcar driver, working 14-16 hours for $1.75 a day, of which $4 per week went to rent, was not wearing the red sateen corset pictured here. The spoofers of the freakish wasp waist that leads this blog (and women like Sofia in my novel) had their way. By the turn of the century, corsets and bustles were old hat, so very 19th century.

And finally, those elegant period etchings of gentlewomen strolling in Central Park with their wasp waists and swan backs were no more representative  of the typical gentlewoman than the airbrushed, Photo Shopped models in glossy magazines resemble today’s young women strolling any street (or mall).

Victoria and Albert Museum, “The secret history of the corset and crinoline”

Tagged with: Fashion
Posted in WWWS