Posted on August 10, 2011 by Pamela Schoenewaldt — Leave a comment 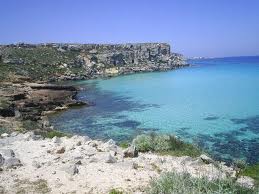 Recently friends asked Maurizio to translate an email from a Sicilian bed & breakfast where they had wanted to stay. The oddity is that this email was in English, sort of. After explaining that there was no “bad” to be had there (“bed”?)  the message went on to speak of the B&B’s wines. It ended, “If you are drill, you can visit where we make them.” Over some of our own wine, we pondered this “drill” idea and came up with increasingly ludicrous intentions. Finally Maurizio had the illumined idea to enter this “English” into a free on-line translation site. And there it was. In Italian, “drill,” as in electric drill, is “trapano.” The B&B is in fact, near the beautiful coastal city of Trapani. So the intention was maybe: If you’re in Trapani, come see how we make our wines.

Which made me wonder about the Trapani-drill issue. Were there drills involved in the making of Trapani? Well, sort of. Trapani, like much of southern Italy, was settled by Greeks, who called it Drepanon, or “sickle,” because of the shape of the harbor. Which is not exactly a drill, but both are cutting instruments. Linguistically, d and t are very close, so the switch could happen easily.

But there are older stories of origin, both rated R (sex and violence). First: when the goddess Demeter was chasing after her daughter Persephone, whom Hades had kidnapped, she dropped her sickle in the confusion. And that sickle became (maybe) the port of Trapani or Trapani itself. Or the sickle-drop just happened there. Second option: When Saturn, the sky god, decided to eviscerate his father Cronus (why not) with a sickle, he dropped it in the sea (funny how butter-fingered these gods were) and thus created Trapani.

And the moral of all this is: don’t trust those free translator services. And by the way, does anybody have any rough translation stories to share?