Home › Just life › When a yak is not enough

When a yak is not enough

Posted on September 9, 2014 by Pamela Schoenewaldt — Leave a comment 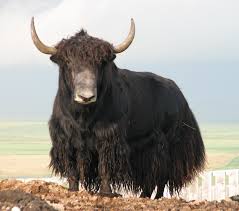 I always had a romantic fondness for yaks, dating from my child’s anthology of literature which included the poem below by Hilaire Belloc, illustrated with a pen and ink drawing of a friendly yak carrying a little girl who looked (I thought) just like me. A yak would be just the thing for taking me to school, which was a long walk (through snow, dragging my lunch pail and so forth). Here’s the poem and doesn’t it make you want a yak?

As a friend to the children commend me the Yak.
You will find it exactly the thing:
It will carry and fetch, you can ride on its back,
Or lead it about with a string.

The Tartar who dwells on the plains of Thibet
(A desolate region of snow)
Has for centuries made it a nursery pet.
And surely the Tartar should know!

Then tell your papa where the Yak can be got,
And if he is awfully rich
He will buy you the creature – or else he will not.
(I cannot be positive which.)

Inspired by these immortal lines I asked my father for a yak. I knew for sure that he wasn’t “awfully rich” or even close, but I thought it worth a shot. No, he would not buy me a yak. Imagine. Winters can be cold in New Jersey, but he was immovable, actually didn’t even seriously entertain a conversation about yak-pet pros and cons.

My mother, however, did say that if I opted against a fancy wedding, they’d give me a yak for a wedding present. Sounded reasonable to a 7  year old.  Some years later when I was 20, I did get married, did have a very inexpensive wedding in my parents’ living room and did NOT get a yak. Or rather not a real one. On top of the wedding cake (German Chocolate, my favorite) was a paper mache’ yak  made by an artist friend. What a blow.

As it happened, the marriage was a huge mistake, ended not soon enough, and the yak was lost in the shuffle. But I still like yaks, or rather the idea of them. However now I live in Tennessee which is probably too hot for them.

What animal did you always want?