Home › WWWS › Being an immigrant in Naples

Being an immigrant in Naples 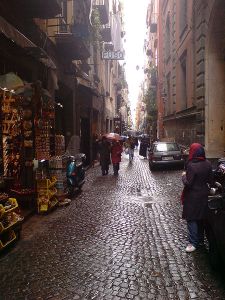 My historical novel of immigration, When We Were Strangers, is set in the 1880s, when Irma Vitale leaves her mountain village in Southern Italy and comes to America. My “research” began in November, 1990, when I left Northern California to live in Naples, Italy with my fiancé, Maurizio, and felt the searing displacement that might have been Irma’s.

I’d been to Italy as a tourist on the customary circuit. Nothing of those sunny easy days prepared me for life in the center of Naples. I had worked in California as a freelance writer with some success. In Naples I could barely frame a sentence. Shopping, the gay experience of so many American-in-Italy films, was complex. “You bombed this!” one man said accusingly, pointing to a church damaged by the Allies during World War II. I went to school in the morning and food stores closed in the afternoon, opening on what seemed a secret schedule. When could I shop? The discovery that food stores don’t open at all on Thursday afternoon threw me into a fuming rage, an overwhelming passion to shop for groceries on Thursday afternoons.

Tense and frustrated, I got tangled up in verbs and participles. On vacation, it could be fun to point and playact and muddle along in a new language. Since I was living here, I wanted to be perfect, at least grammatical. And of course I wasn’t, far from it. “Relax,” said Maurizio. But I couldn’t and wasted time learning words of limited utility in the present circumstances: “cianura” — cyanide, and “defenestrazione” — killing people by throwing them out of windows.

November was cold and rainy; our apartment unheated. We lived in coats. In the old quarters of Naples, roads are paved with basalt; buildings climbing overhead were dark with age, opening to slits of gray sky. No parks, trees or grass. I knew that in a walled medieval city, parks are an unreasonable luxury, yet I ached for California’s green.

“It’s a small apartment,” Maurizio had warned before I came to Naples. No kidding. We had a basso, two rooms on the ground floor of a vicoletto, an alley perhaps 12 feet wide, paved in the eternal basalt, in constant shadow. Our front room had one “window,” an opening to the vicoletto about 18 inches square, lined in black marble a foot deep. That would be our refrigerator. We parked Maurizio’s motorcycle inside for safety. Our hand-washed clothes dried with painful slowness here too, for they would be stolen if hung outside. Our bedroom had no window. Frequent power failures left it pitch dark. But of all these inconveniences (soon over for we had moved by Spring), the worst was to feel so foreign, awkward and ignorant. After some social or linguistic gaffe, or frustrated by the seeming complexity of each new enterprise or bureaucratic affair that left me feeling childishly incompetent, l wanted to say, “In my country, I know the rules.”